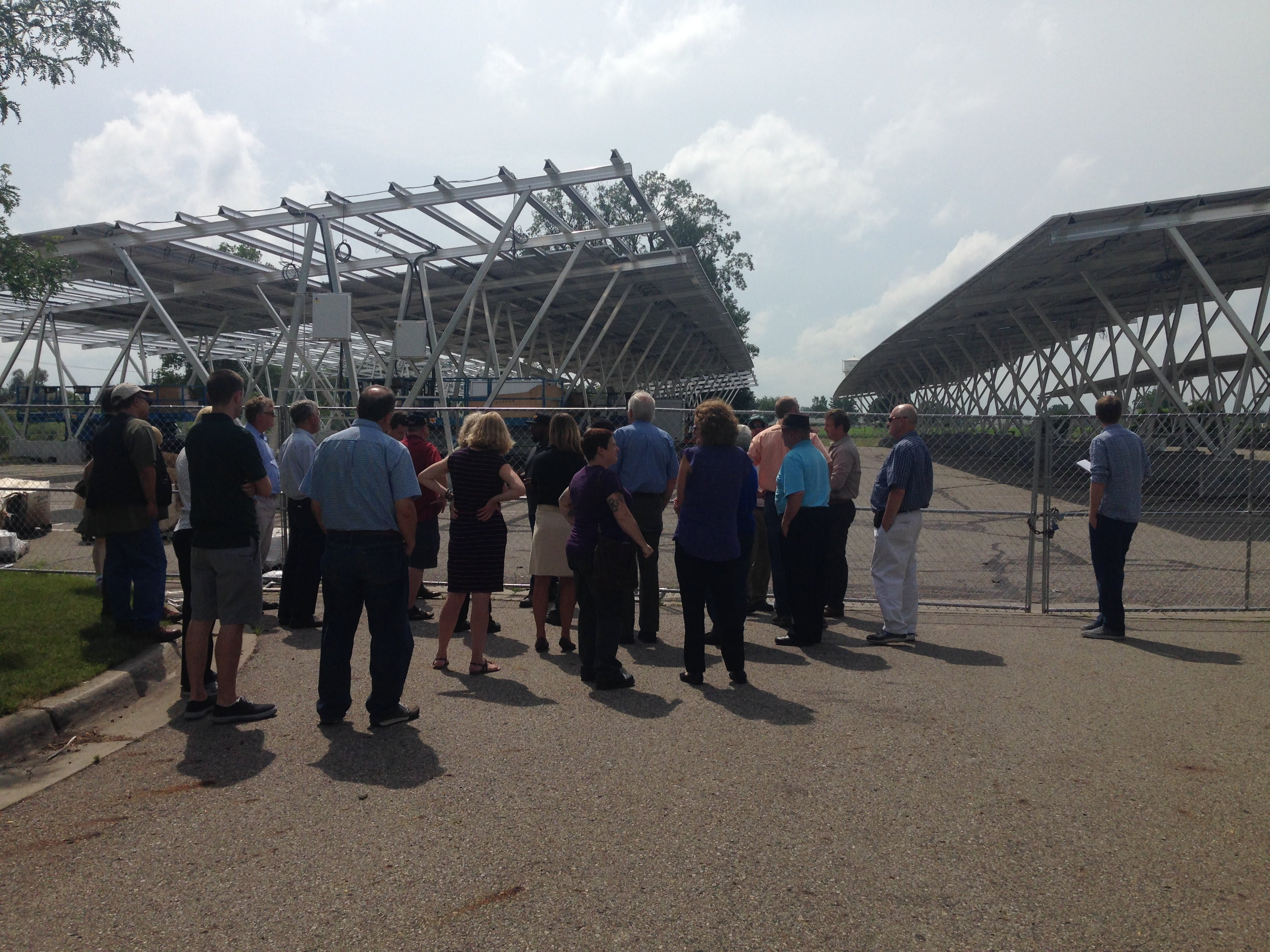 Solar Carport Tour of the 13 MW Michigan State University project was hosted by GLREA on July 12.  40,000 panels will cover 5,000 parking spaces. Around 40 attendees listened to a presentation by Jordan Richardson and Andrew Proctor, Inovateus Solar.  Lynda Boomer, MSU Director of Planning, Design, & Construction and Wolfgang Bauer, MSU Senior Consultant, helped explain various aspects of the project.   The presentation was followed by a tour of one of the five parking lots where the solar carports are being built.  The project will be completed by the end of this year.

Institute for Energy Innovation (IEI) study, Solar Energy in Michigan: The Economic Impact of Distributed Generation (DG) on Non-Solar Customers, found solar users are supporting the grid and should not be subject to extra utility charges. The new energy law requires the MPSC to create new rates that treat both solar and non-solar ratepayers equally.  “The vast majority of studies on the value of solar conclude that customers with solar DG systems who participate in ‘net metering’ programs represent a net benefit to all utility customers and the electric grid as a whole,” said Dan Scripps, president of IEI. The IEI evaluated more than 40 solar value studies as well as nine additional studies not included in any previous analyses. More details.

Michigan Saves has reached a milestone by helping homeowners and businesses install 1 MW of solar energy across the state.  Since June 2011, the program has helped finance installations at 132 homes and nine businesses, totaling $3.5 million in solar investment. In all, Michigan Saves has been involved with roughly 8,600 projects totaling $102 million in clean energy investments.  More details.

Consumers Energy is teaming up with Rockford Construction to create “Circuit West,” .5 to 1 MW solar panels and a battery storage facility in a 10-block area west of downtown Grand Rapids.  The energy district will have solar panels on the roofs of new buildings including a new urban Meijer grocery, housing and offices.
More details.

Cypress Creek Renewables would like to build as many as fifteen 20-acre solar farms in Huron County and recently updated the County Board of Commissioners on the company’s intentions.  The 20-acre sites will each cost $3 to $4 million to build, and would produce 3 MW.  A moratorium on commercial solar development has been imposed by the Board for a year or until an ordinance is finished.  More details.

UM Solar Car Team has unveiled its latest vehicle, the Novum or “new thing”.  Previous designs have mimicked a catamaran, but this year the team decided to create a leaner and more aerodynamic vehicle. The vehicle will use the most advanced gallium cells and will be able to maintain speeds 50-55 mph.  The next stop for Novum is Australia for the Bridgestone World Solar Challenge.  A 17-member Michigan team will compete against solar car teams from around the world in a 1,800-mile race.  More details

Martin Public Schools in Allegan County is hoping to lead the state in its use of solar power. The district plans to install solar panels on every building.  A $17 million bond project is underway. It includes upgrades to heating, LED lighting, and a new gymnasium and auditorium.  40% in energy savings is expected and eventually the district may operate completely off the grid.  More details.

Parker Village, LLC  has partnered with OHM Advisors to develop designs for its community resource center in Highland Park.  Phase I includes an Aquaponics Garden & Garden Cafe, farmer’s market, education & training and a community space for outdoor lectures and events, with additional phases including an event center, restaurant, co-work space & business incubator, graphics & print shop, S.T.E.A.M Lab, and media production center. The majority of the campus will be powered with renewable energy.

Consumers Energy has broken ground on its third wind farm.  Cross Winds Energy Park II is expected to be up and running in Tuscola County’s Columbia Township in January 2018.  The 19 new turbines will be 499 feet tall and generate up to 44 MW. Columbia and Akron townships have approved Phase III plans.  This final phase is expected to go into operation in 2020.  More details.

Oak Ridge National Lab had developed an ultrasonic drying concept that uses vibrations instead of heat to dry clothes five times more efficiently in half the time.  Researchers have developed a full-scale press dryer and clothes dryer drum.  More details.

World’s Largest Lithium-ion Battery will be installed by Tesla at a wind farm in South Australia by the end of the year.  The Neoen Hornsdale Wind Farm will be paired with Tesla’s 100MW/129MWh battery. CEO Elon Musk has guaranteed that Tesla will deliver the battery within 100 days of the grid interconnection agreement being signed or his company will provide the battery for free. More details.

Solar Power Windows have been installed at the headquarters of a Dutch bank. The windows have solar cells installed in the edges at a specific angle that allows incoming light to be converted into electricity.  The windows could generate 8 to 10 watts of power.  The bank has been fitted with 323 square feet of the Physee PowerWindows. The bank’s employees will be able to plug their smartphones into the windows to charge their batteries. Physee will have its first large-scale project at a 19,000 sq.ft. new residential complex in Amsterdam.   More details.

Tesla Model 3 has begun production with the first deliveries expected on July 28.  Elon Musk has said that production would increase quickly, with 100 Model 3s produced in August and 1,500 or more in September. He said that he expected the company to be able to produce 20,000 a month starting in December. The Model 3 will be priced around $35,000, but there is a federal tax credit up to $7,500.  More details.

Grand Valley Farm in Rives Junction has been using a solar thermal system to heat water for over a year. The farm will be hosting a light dinner starting at 6 p.m. on Aug. 17followed by a tour of its solar thermal system and other energy efficient practices it has implemented including lighting, irrigation, and grain drying technologies.  More details.

ASES’s 46th annual conference, “SOLAR 2017: Building a 100% Renewable Energy Community,” will be held October 9-12 in Denver, between the weekends of public days at the U.S. DOE Solar Decathlon.  Registration for SOLAR 2017 is now available online.

1st Annual Sustainable Detroit Forum: Showcasing our Healthy High-Performance City
will be held at McGregor Memorial Conference Center, Wayne State on Oct. 25th, 9:00 am – 3:30 pm.  Save the date.
Click here to be introduced to GLREA