Who else but Local 58 of the International Brotherhood of Electrical Workers (IBEW) could showcase the talent of their members with anything less than an award-winning breakthrough in sustainable energy design. They demonstrated that by using existing technology, a 52-year-old building can be repurposed (some call this a gut rehab) into the first commercial Zero Net Energy (ZNE) building in Michigan.

The building housing the IBEW headquarters at 1358 Abbott Street in Detroit’s Corktown neighborhood was originally completed in 1966. After more than 50 years of service, the IBEW decided it was time to renovate the building and began planning for extensive modifications with the goal of creating Michigan’s first ZNE-compliant commercial building. Work on the 33,000-square-foot facility began in September 2016 and was completed in the spring of 2017.

The IBEW Local 58 Zero Net Energy (ZNE) Center was created as a working example of what is possible to achieve with deep renovations and showcasing the many options available today for reducing energy consumption and increasing energy savings. The design and construction team spent countless hours engineering and calculating the building’s energy consumption. They deployed an array of energy-saving technologies to make the IBEW HQ a true ‘zero net energy’ facility. This example will make it easier for signatory contractors with the National Electrical Contractors Association (NECA) in the region to introduce the energy- and money-saving technologies into new construction and renovations that are proven and available for reducing energy consumption. The Center utilized leading NECA members in the region for the installation work. The facility has been rebuilt using the newest technologies, engineering, and construction to reduce the building’s baseline energy load to the lowest possible level.

The IBEW Local 58 Zero Net Energy (ZNE) Center was created as a working model of what is possible to achieve with deep renovations and to showcase the many options available for reducing energy consumption and increasing energy savings.

Awarding-Winning IBEW ZNE Center
In addition to the staff at IBEW, the talent pool for creating the first Zero Net Energy building in Michigan included a team of many Construction Association of Michigan (CAM) members, signatory contractors with NECA, as well as members of the Michigan Energy Efficiency Contractors Association (MEECA). MEECA members, Development Solutions Midwest, and The Nielsen Group collaborated as part of The Green Team Coalition on this award-winning project. Services provided included an ASHRAE Level II Energy Audit, Gap Analysis, including project development and management. On March 6, 2018, the IBEW Zero Net Energy Center was awarded Project of the Year by the MEECA. The USGBC Detroit Region and the Detroit 2030 District also recognized the Center for Outstanding Sustainable Design in November 2017. 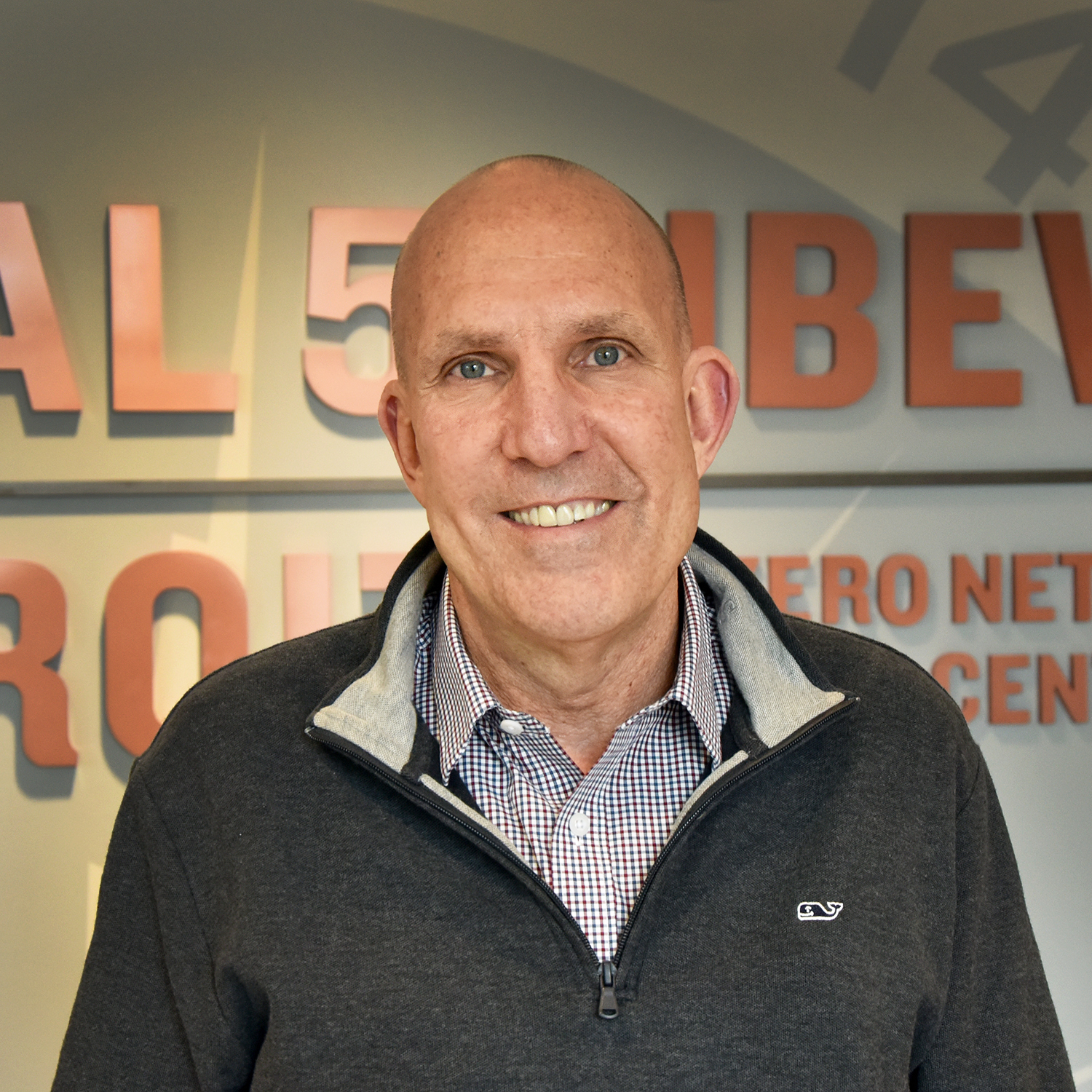 “We got together and decided we needed to do something decisive and radical with this building, and we decided to go for zero net energy (ZNE). To get to zero net energy, the first thing we knew we had to do was ultra-insulate the building. So, we insulated the roof, the walls and replaced the windows with energy-efficient windows. We also decided to use geo-thermal heating and cooling. We put in 600 solar panels up on the roof. All of that had to be laid out on the roof and all the racks had to be built and set in place. We also put all LED lighting in throughout the building. At the end of all this, I think we’ve come up with an energy-efficient building, and on top of that, it’s a beautiful building.”

The IBEW Zero Net Energy Center Features Nine Distinct Energy-Producing and Energy-Saving Modifications:
Geothermal Grid
Contractor: Strategic Energy Solutions / Berkley, MI
The vertical closed-loop ground heat exchanger consists of 39 boreholes, drilled to a depth of 340 feet each. The system utilizes a 20% propylene glycol solution. The original design called for the header pipes to run five feet below the ground so that they would sit beneath the frost line.
However, upon encountering an unmarked, abandoned gas line on the site, the header pipes were installed approximately four feet below ground and were covered with two-inch rigid insulation to serve as a thermal blanket. After installation was completed, the trenches were filled with sand and compacted to 95%. 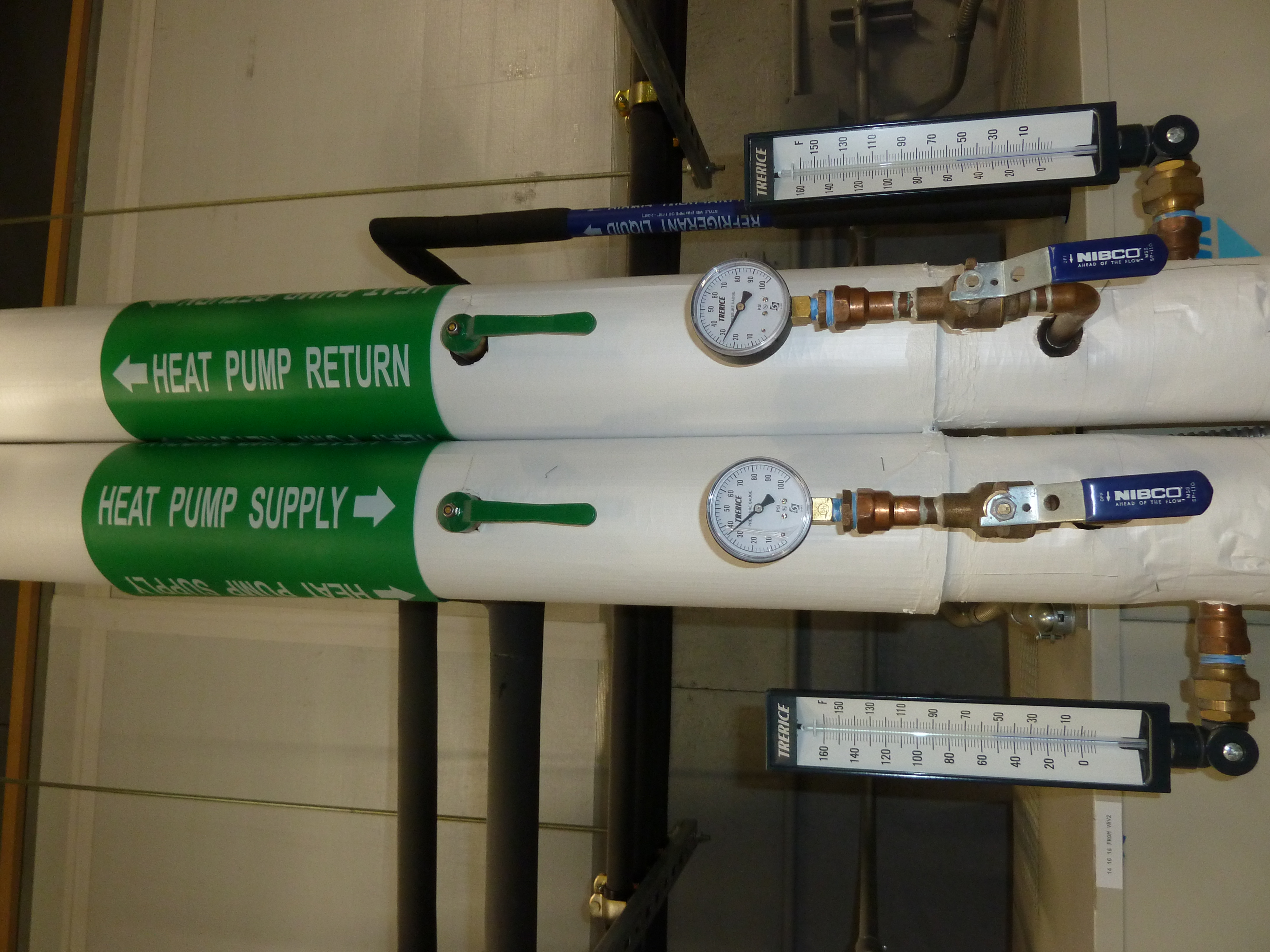 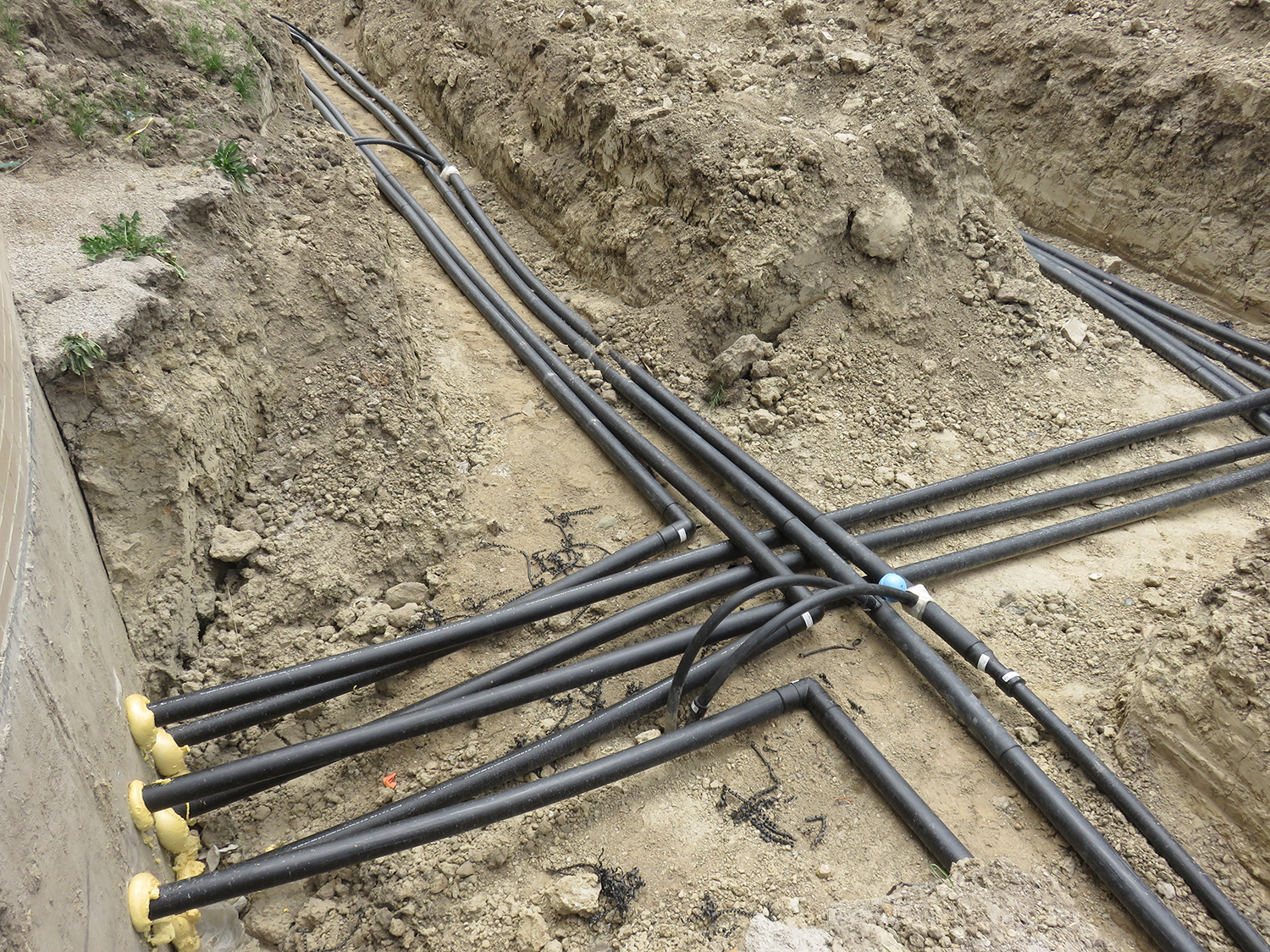 The geothermal system provides 100% of the heating and cooling load. Geothermal grid trench
installed to the manifold inside the building connects 39 boreholes, drilled to a depth of
340 feet each.

Rooftop Solar Array
Contractor: Michigan Solar Solutions | Commerce Twp., MI
The IBEW installed 600 Michigan-made Suniva 290w solar panels on the roof. This 174kW solar array covers the roof of the building.  It’s also the safest system available, and it exceeds code requirements through the 2017 version of NEC. This system will produce over 200,000kWh a year at peak power. 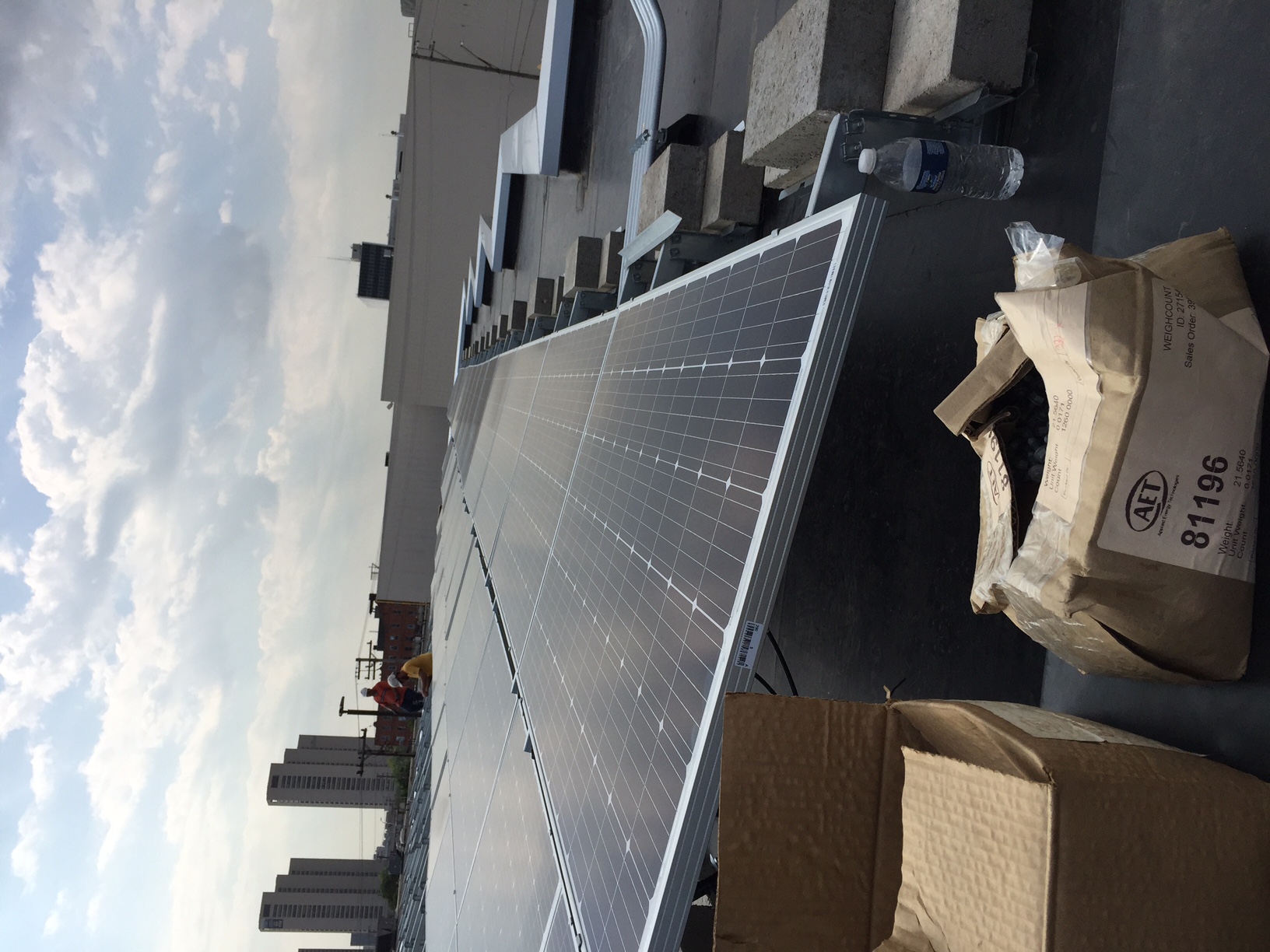 Solar DC to AC Power Inverters
Contractor: Motor City Electric | Detroit, MI
36 strings of 17 solar panels (three strings per inverter) were connected to 12 inverters and then integrated the DC into the AC power for the building. AC power comes in to a distribution panel and joins in with the regular electric service. The building draws power from the solar panels first before taking power from DTE (the local electric provider). 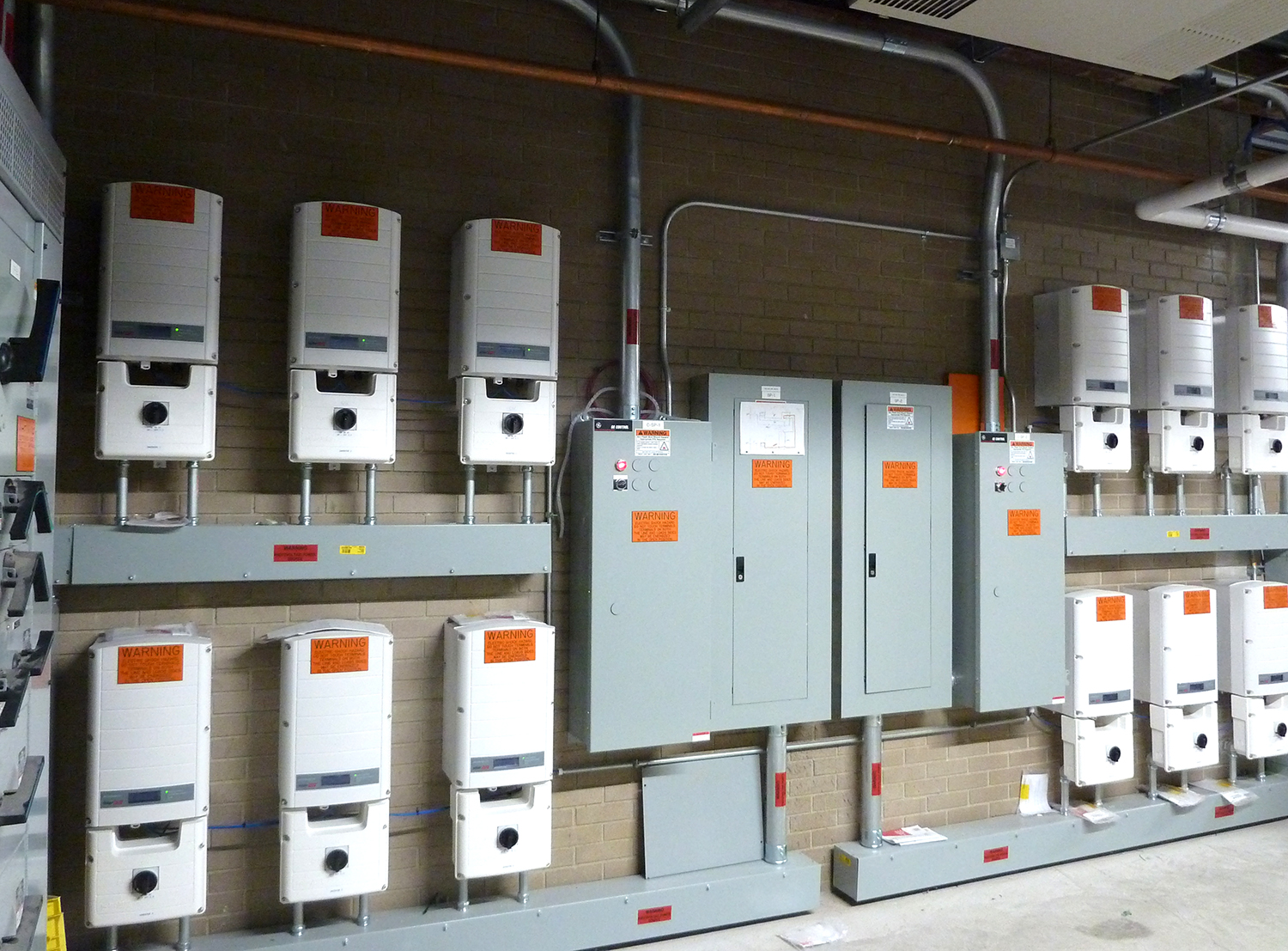 Mechanical room with bank of power inverters that take the DC power from the solar
system and convert it into AC power for use in the building.

SIP Panels & VaproShield Wall Insulation
Contractor: Jasman Construction | Plymouth, MI
A structural insulated panel system (SIP) was installed around the exterior of the building using R-24 wall insulation with metal exterior panels. The walls are so well-insulated that it disrupted cell phone connections in the building. VaproShield (a high-tech version of Tyvek) lets water out, but not in. The VapoShield fibers twist around the screws, making a tight fit without using any chemical products that might degrade over time. All the pieces were cut to the right size so that there was very little scrap/waste on this project.

Energy-Efficient Windows
Contractor: Edwards Glass | Livonia, MI
All the storefront and curtain wall system windows were replaced in the building.
32 Tubelite T1400 Series windows were used for the exterior windows, and Tubelite 400 series windows were used for the two curtain wall systems. The T14000 Series is 2” x 4 ½” deep flush glazed with 1” insulated glass, a poured and de-bridged thermal break provides condensation resistance and limits thermal conduction. All windows used SNX 62/27 Thompson IG for the glazing. The visible light percentage is 62, and the solar heat gain coefficient is 0.27. This is when the low E coating is on the number 2 surface. Class I Clear Anodized finish was used on all windows.

The Results
We don’t have a full year of data yet, but so far, the systems are performing as advertised, and the
initial measurement of the energy performance at the ZNE Center reflects a 50% reduction in energy between 2016 and 2017, which reflects a 73% reduction since 2013. The balance of energy load is made up in the solar and geothermal systems.

All Photos Courtesy of IBEW Local 58