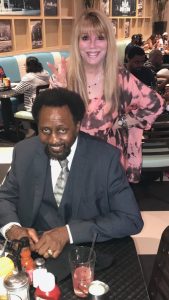 Fight night! Hall of Fame boxing legend, Thomas ‘Hitman’ Hearns, and Jackie Kallen, known as the first lady of boxing, in conjunction with Ten Count Promotions, are bringing big time boxing back to the Motor City on Saturday, June 23 at the Atheneum Suite Hotel (100 Brush Street in Detroit). Eight undefeated fighters will put their records on the line in the first Boxing in the D series to be presented by Hearns and Kallen.

“Boxing has been my passion for four decades, and I am committed to see top-notch fight cards return in a big way and become a staple in our thriving city,” said Kallen, who was portrayed by Meg Ryan in the Paramount Pictures feature film, “Against the Ropes,” and appeared on the NBC television series “The Contender,” with Sylvester Stallone.

The June event will feature undefeated local fighters Taylor Duerr, a light heavyweight Irish sensation from Royal Oak, as well as Detroiters Isiah Jones, Derrick Colemon, Jr., and Cedric Paul. The card will also feature Nigerian-born Oluwafemi Oyeleye, an All Africa Games gold winner, Donald Brown, making his pro debut, Paolo Parente, a real-life Rocky originally from Italy, and Andre Holmes. There will also be a couple of surprise bouts to be added.

“I have always wanted to be on the promoting side of the sport I love and can’t wait to bring the best up and coming fighters, boxing celebrities and renewed excitement for the sport back to the city I love,” said Hearns, a seven-time world boxing champion.

Ringside seats are $100, reserved seats are $55, and standing-room general admission tickets are $35. Tickets can be purchased at NEPTIX.COM or at the door.