Today the students of Birmingham Covington School, an official Michigan Green School in Bloomfield Hills, learned first hand what it means to be a part of a sustainable, green future. 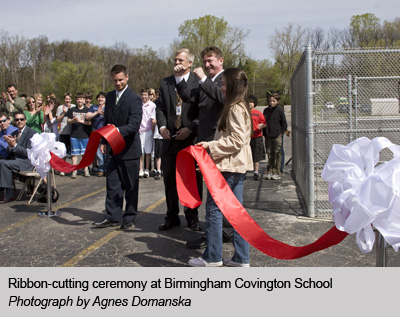 At 11:00 a.m. this morning, BCS held a ribbon-cutting ceremony for the grand revealing of a 1,200-watt wind turbine that was erected in the school’s parking lot on the west side of the building.  The turbine, according to Neil Campbell, the BPS director of facility operations, was donated by Windspire, formerly known as Mariah Power, a national manufacturer of vertical wind generators.  Campbell said the donation was made possible by John Carlos , the director of business affairs at GreeningDetroit.com, and his connections with contractors throughout the Metro Detroit Area.

Campbell said he thinks the turbine is part of an important approach for the students to learn about alternative energy.

“I think it’s a great thing,” Campbell said.  “I think we’ve basically got emerging technologies that I think demonstrate the need for an integrative approach to energy.”

John Prisciandaro, a professor of engineering technology at BCS, said he has been teaching fifth, sixth, seventh and eighth graders about energy conversion in the past, and now that the wind turbine has been put at the school, he said he will be using the energy created by the turbine for experiments to help his students continue to learn about alternative energy.  Prisciandaro, who sums up his job as a teacher by saying he “provides kids with opportunities to do hands-on applications of math and science,” said he has a two-fold purpose for using the wind turbine at the school.

“Well, besides analyzing the output, we’re going to use it as a source of electricity for basic electricity experiments,” he said.  The experiments are expected to take place in the engineering technology lab. 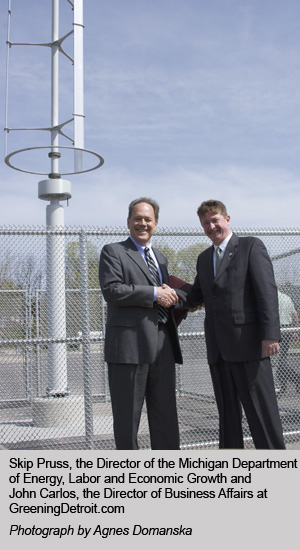 Also present at the event were several individuals who contributed to the ceremony to make it possible, including Skip Pruss, the director of the Michigan Department of Energy, Labor and Economic Growth.  Pruss, who was appointed by Governor Jennifer Granholm in 2008, spoke at the ceremony on behalf of Granholm and the state of Michigan.  Pruss in his speech acknowledged the importance of the wind turbine for three main reasons.

Pruss also said that BCS and those who came together to make the wind turbine a reality will prove to be leaders in a green future.

“The school and GreeningDetroit.com are absolute leaders,” he said.  “The record will show that, as this becomes ubiquitous and as more and more cities, municipalities, private parties and public institutions adopt green energy measures, this school will be one of the first.”

“It’s wonderful that this school is doing all this and has developed, as I understand, a green curriculum,” he said.  “They are very focused on clean energy technology, on science and on math.  And that’s so essential to diversifying the economy and getting us out of the bad times that we’ve experienced recently.”

John Carlos also said that there is an importance on keeping things local.

“This wind turbine was brought to you by a Michigan company (GreeningDetroit.com) and a Michigan Dad, John Carlos, was manufactured here in Michigan by Michigan workers, and was installed, assembled and erected by Michigan unionized labor for Michigan children.”